This program DemoDivMS is designed to predict the genetic diversity at a microsatellite DNA marker, in a finite population, for various mutation models and for variable population size.
The program is very quick. It is written in Fortran and makes use of NAG numerical routines. It creates small files of the order of 50Ko.

Important : the NAG library is needed in order to use the software DemoDivMS.

Download source code (version 0.2) demodivms-0.2.0.tar.gz You can them easily compile and run it under linux/unix OS.

The goal of the program is to propose a tool able to describe the expected current genetic diversity at a microsatellite marker from the past history of a population.

The user describes the mutation process of the marker and the demographic history of the population; the program estimates the final genetic diversity using coalescent theory adapted to variable effective size. For any pair of alleles sampled in the population, the program provides the probabilities P0, P1, P2, … Pd,… that alleles of the pair show a difference D of 0, 1, 2, … d … repeats of the microsatellite motif. Associated measures of diversity are given: the mean and variance of the |D| values, and the values of theta (the parameter 4 N µ) derived from expected heterozygosity or from the distribution of D .

The microsatellite marker is assumed to be submitted to a symmetrical Stepwise Mutation Model, so that the number of motifs is increased or decreased by a number k with equal probabilities if some mutation occurs. Available options include the single step mutation model, the geometric model (the probability that mutation leads to k steps is (1-c) c(k-1) for some c<1, or any user-defined model (mutation leads to k steps with probability mk). 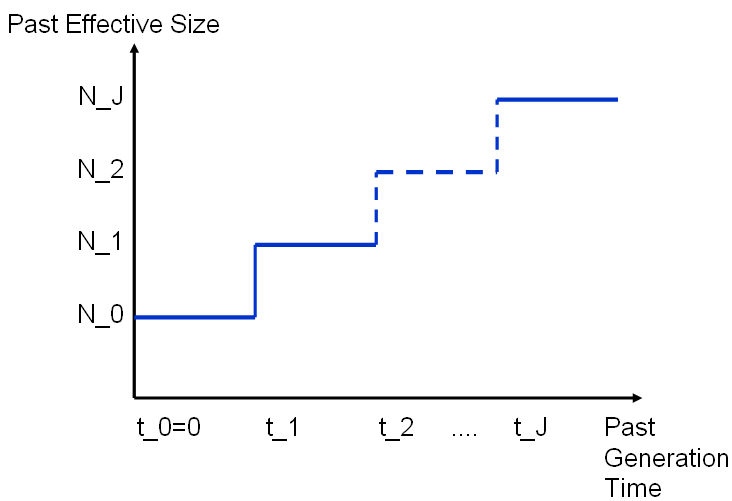 An option is proposed to account for recurrent immigration from a large population of constant structure. Two additional parameters are needed:

The user is asked a name for the output file (max: 20 characters), and values to fix the mutation model and the past demography of the population.

>Give the name of output file¶

>Give the current effective size N_0 of the population¶

>Give the mutation rate µ¶

>Give the total number of events (J)¶

[Optional, if the Migration Model is chosen]

We consider a population of present effective size 1000 that underwent a bottleneck between the 100-th and 200-th generations before present time. The global mutation rate of 0.001. 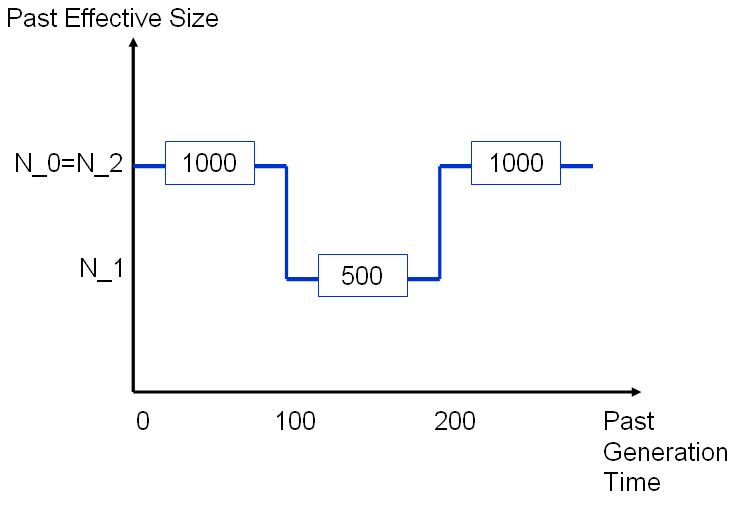 See below the details with the Single Step Model (SSM). The same example with the two others models are presented with just the prompt different from the SSM.

We are presenting here an example of DemoDivMS entry in the case immigration.

We present here an example of output file.

Calculations are based on the joint analysis of the drift process in a finite population and of the mutation process at a microsatellite marker.

Drift in a population with variable size is studied assuming that the population has undergone successive periods in which population size remained constant, so that the global analysis of the coalescent is split into such periods. Hence calculations are easy within each period, and tractable when joining periods, to get in fine analytical expressions for most parameters of interest.

Modelling mutations assumes that under mutation of an allele, the number of the microsatellite motifs may be changed with probabilities that do not depend on the number of motifs in the allele. Although restrictive, the formulation allows analytical solutions to be derived using generating functions of the distributions, for any symmetrical mutation model. The single step mutation model, the geometric model and any user-defined stepwise mutation model are implemented in the program.

Basic calculations are concerned with the joint probabilities that a set of alleles are copies of a single ancestor gene some time ago, and that they show some difference concerning their state (number of microsatellite motifs). Results allow both the distribution of coalescent time and of distances between alleles to be calculated, for a large class of stepwise mutation models and for any ancestral demography. In the present program, only probabilities of distances between alleles are proposed, but the theory allows also the distributions of coalescent times to be calculated.

From a technical point of view, analytical solutions are obtained for the Fourier transform F(x) of the distribution of distances D between pairs of alleles (the distance between 2 alleles is the difference between the numbers of motifs they bear):

the summation being taken on all negative, null and positive integers k (noting that P(D=k) = P(D=-k) ). Analytical expressions of the function F(x) are shown in the given reference, as a function of the mutation model and of the demographic history assumed for the population. The numerical value of the probability that two alleles are at distance k is then obtained in this program from a numerical integration:

Additional indices of diversity are calculated from this distribution, such as the expectation and variance of the distances between alleles in a sample, and values of the theta = 4 N µ parameter giving the same diversity measures under basic assumptions of constant population size and single step mutation model.